Comparing Business from the 1960’s to the Present. What’s Still Relevant? 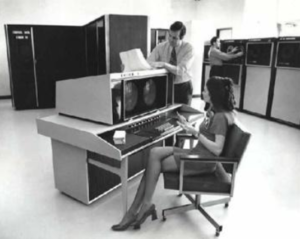 Has the United States become a better place to work in during the past 50+ years?

The U.S. has come a long way through technology. Many feel that we have fallen behind in education and innovation.  The computers we had in the 1960’s were used primarily by government and big corporations and filled an entire room.  Not until the 1980’s did small business become familiar with mobile phones, desktop computers and internet connections. Today, all of these are the norm.

Small business in the 60’s was usually associated with physical jobs, such as family farming, sales and manufacturing.  Women usually stayed home keeping house and raising children with the men supporting them.  Now women play a much bigger role in the workforce.  Today, men and women alike can take advantage of the internet to run entire companies quickly and efficiently with a much greater market, along with the flexibility to run these companies from home or small offices.

Offices in the 60’s were so different from today’s office. Working in offices back then consisted of a landline phone, typewriter, adding machine and making copies with carbon paper. Businesses corresponded with letters or in person.  Even getting to work involved a bus ride or carpooling since most homes had only one car.  Today business is conducted via cellphones; text, e-mails, and even having meetings face to face by video chat.  The need to travel to other cities or countries to handle business has dropped significantly.  The internet wasn’t created until 1990 but now no business can work without it.

Many of our clients at Summit Executive Suites have been with us for over 20 years and have seen significant changes during that time.  Several started working in the late 60’s and early 70’s without internet, computers or e-mail.  The changes in the way they did business before versus now were overwhelming at times.   Learning to use a computer was foreign, but they have adapted and flourished as the rest of the business community has.

Summit Executive Suites includes all of the up-to-date technology necessary to run a small business, without the hassle and cost of bringing in personal equipment.  Whether you need a virtual office or a physical office, we would love for you to come by and see the difference.